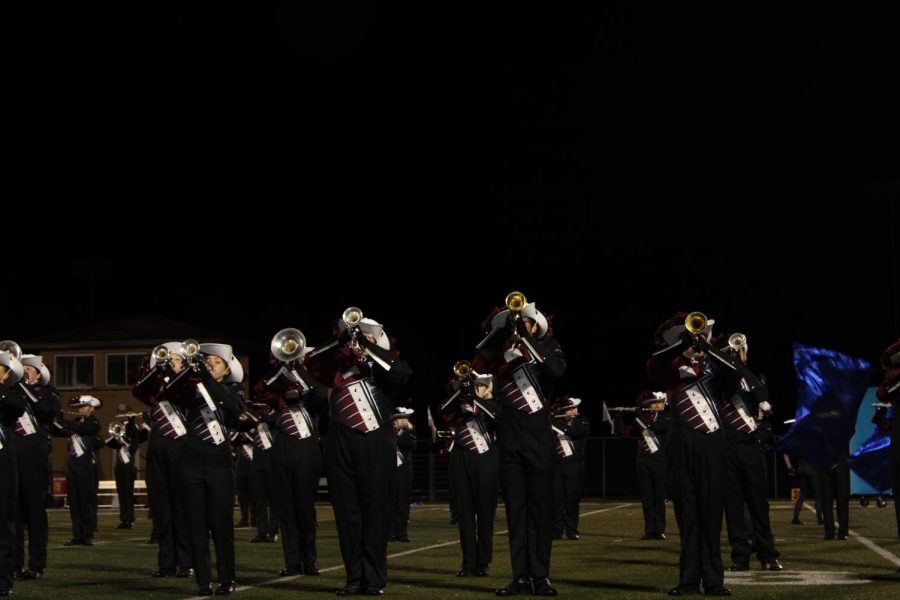 Brody Light, music aficionado, taught himself a variety of instruments.
“My aunt showed me the notes on the piano or sheet, and I learned where C was, and I had to teach myself. Everything from there, I had to go, ‘Okay, this is going up, is this going down?’ Just using stuff I learned in music class,” said Light. “Other times it’s YouTube – a lot of times it’s YouTube. When I had to learn the harmonica for [the marching band] show sophomore year, a lot of that was YouTube. It’s incredible because I watched probably 12 hours of YouTube trying to figure out how to play that thing, and it was 20 seconds of a single video that showed me what I needed to know.”
Freshman Zoey Scarbrough has used similar methods to Light.
“Honestly, YouTube videos and looking at the book that I got from Merle’s Music,” said Scarbrough.
Even with these tools, Scarbrough had her fair share of struggles.
“There was a completely different embouchure than other instruments I was playing, and so I had to fully adjust. And, it’s like a different key,” said Scarbrough.
Light struggled too.
“One major struggle is when you’re sitting there and you’re trying to teach yourself something, you’re gonna mess up. You’re going to repeat the same thing over and over again,” said Light.
“Unless you are actively doing it, or actively teaching someone how to do it, it gets really annoying real quick. Having to do instruments that I can’t practice at home, that’s probably the biggest struggle.”
Scarbrough has learned to play several instruments.
“I play trumpet for marching band, but I can also play flute, piccolo, clarinet, and a bit of alto sax,” said Scarbrough. “I taught myself trumpet right before the beginning of eighth grade, because I didn’t pick it up at all until I wanted to join jazz band, and I just thought trumpet would be cool. Trumpet is one of the recent ones that I’ve learned. The first one I learned was clarinet, and then I learned flute, picked up on piccolo because I got first chair and Piccolo is what you get for first chair. And then I picked up the trumpet for eighth grade and played a bit of saxophone.”
Light plays many instruments.
“I’ve taken lessons for trumpet and guitar, but outside of that I can play baritone, piano, bass, mandolin, ukulele, harmonica, recorder, marimba, drumset, Cajon, djembe, hand drum, a bunch of percussion toys like the maracas and stuff like that, bass, drums, tenor drums, and that’s about it,” said Light.
Despite playing several instruments, Scarbrough only owns a few.
“I use my aunt’s clarinet to begin with, but I have a flute at my house, and a trumpet, and I had to give the piccolo back to junior high…I practiced on saxophone, [with] my friend’s instrument,” said Scarbrough.
Light also doesn’t own every instrument he knows how to play.
“A lot of them either I don’t play them well, so it’s not worth buying one when they’re $600 or $700. Or like marimba, one of my favorite things to play. It’s a big wooden xylophone that takes up six feet. It’s a table basically, and it’s upwards of $2,000 a piece. So that’s not something that’s ever going in my house,” said Light.
Light is involved with the Rolla High School marching band and jazz band, so he is constantly practicing.
“It absolutely helps me because it forces me to do stuff I either don’t like or have never heard of. I’m in jazz band, and that’s where I get to play guitar. I get to learn something new, and I get to add that to my wheelhouse for later when either I want to write something, or when I want to do a gig,” said Light.