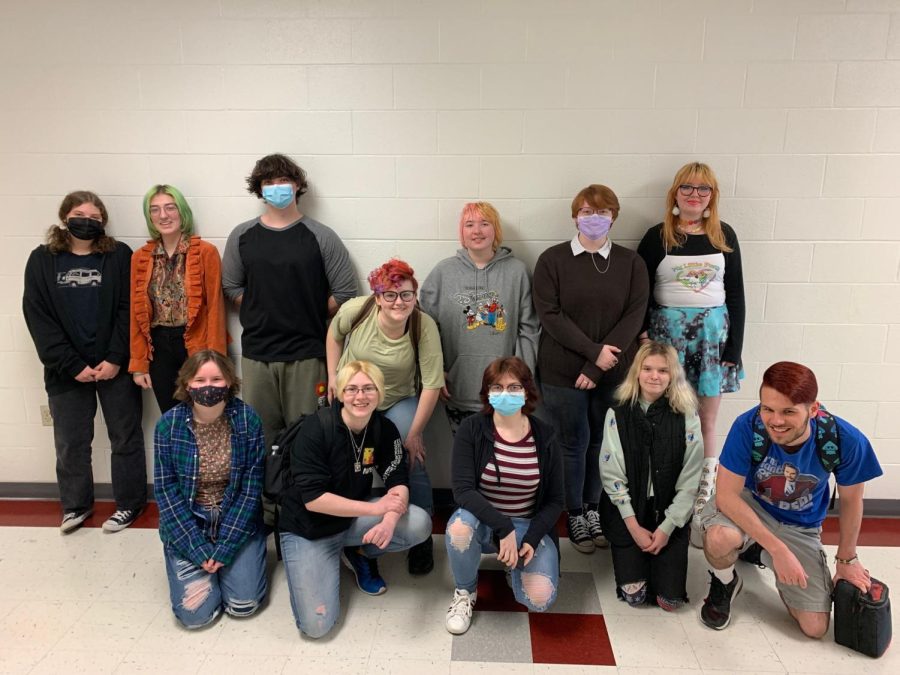 On Tuesday evenings, a student may pass by room 247 and see about 30 kids sitting in the classroom talking about current events, but that’s not all that they do. They create a safe environment for students to come and socialize with others. This club is called Unity Club, it is sponsored by Aaron Loker with Kiwi Cooper as president and Rat Elliot as vice-president.
“So basically, the biggest and main goal is to provide everyone and anyone a safe place,” said Cooper. “This actually makes me really sad because I know a lot of people who, no matter how they look or how they dress, they get bullied. They have tried their absolute best to fit in and they just get bullied when they try to be themselves.”
The club would like to expand their horizons to the overlooked student body.
“I do want to expand the group of people that’s in [the club],” said Cooper. “The main target of our club is the LGBTQ community, which is perfectly fine…But we also need to focus on giving people of color their own space, people with different ethnicities, different backgrounds, and different beliefs. Especially, we are very much leaning towards the liberal side and there is a club that leans more to the conservative side. And we actually had a really big step because one of the more conservative club leaders came to our club and we made her feel welcomed.”
The club hopes to expand by joining with other clubs to do some fun activities like have a water balloon fight or pick up recycling with Eco Club.
“We are wanting to unite more of the clubs that have different aspects to people,” said Cooper. ”It’s not set in stone, but we are thinking of trying to get other club leaders to come work at a soup kitchen with us…We still have a lot of planning to do. We want to just kind of expand and bring the clubs more together, if that makes sense.”
Unity Club has many ideas and dreams for the future of the club. The club aspires to be more open to students and have a safe area for them.
“The goal is to just give people a place to hang out,” said Loker. “It’s kind of a community where they might not have all the time and a place that they can share their opinions and beliefs. And just be in a respectful place that’s going to take them seriously and not make fun of each other.”
According to Cooper, bullying in this school is a big issue and one that is hard to handle. However, they were able to support those being bullied via the club.

“My partner, Rat, and I got bullied a lot just for holding hands in the hallway, which you see straight couples do all the time,” said Cooper. “And we got we got the nickname ‘The Green Haired Lesbians’. And one of our club members had a wonderful idea, ‘Why don’t we all dye our hair or wear green to support people who are getting bullied?’ and so one day we did it out of nowhere, it was like a spontaneous thing, a word of mouth thing. Like if you didn’t know anyone in the club, you didn’t know about it because we wanted to make sure that people didn’t try to combat it. Kind of like the ‘dress up like an animal’ day. And then people wear camo to ‘hunt’ the animals. So we just did it spontaneously. And like a whole bunch of people showed up we made ribbons. And people were asking, ‘why is everyone wearing green?’ And we were like, ‘if you know, you know.’”
One thing that people can do when getting bullied is go to a trusted adult; however, that doesn’t always work.
“I get called names, slurs…It happens a lot,” said Elliot. “A lot of people are getting treated like that. It’s just how it is. I was almost shoved down the stairs…We’ve been to the principals, we’ve talked with the school administrators, but they’re not really doing much. So we’re just [in Unity] trying to be there to support each other.”
Bullying isn’t the only hurdle that this club faces, they also have to deal with people who oppose their club and COVID-19 made the club unable to meet for a year. Lucky for the club, Cooper and Elliot brought the idea of the club restarting back up to Loker.
“Last year, it kind of started going downhill when COVID hit,” said Loker. “It’s just because we weren’t sure about meetings, especially in the first semester, and everybody was kind of concerned about sticking around after school and being in groups and stuff. So it kind of really slowed down. But Kiwi and Rat came to me at the beginning of this year, and were like, ‘Hey, let’s get this thing back,’ so they kind of took over the reins.”
Some people tend to oppose the club, but the leaders are determined to always create a safe place for the students of RHS.
“Plus, I think just being in a place like Unity Club, where you can be welcome and free to be yourself…I think that’s good,” said Loker. “Even if you are kind of getting flack outside. You always have that place that you can go to and feel safe.”
In Unity Club, anyone and everyone is accepted because the club is a safe place for those who need or want stability.
“Anyone is welcome in Unity,” said Cooper. “It doesn’t matter if you’re gay, straight. You can be anything you want in Unity as long as you’re not being offensive.”